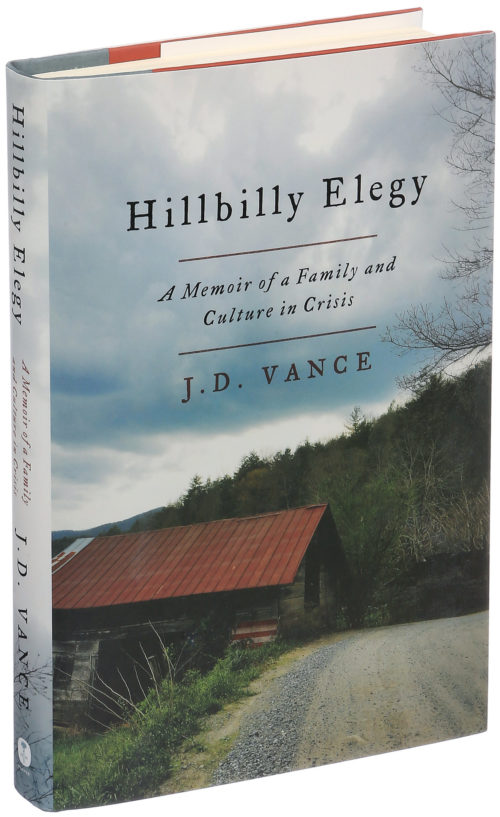 This is a young man’s memoire of growing up in his tribal hillbilly community between the mountains of Kentucky and the declining de-industrialized town of Middleton, Ohio.  It is an unforgiving examination of the American dream, a reality for the author but a myth for the American society at large.  A departure from our usual fiction reading, Hillbilly was chosen as our November selection to satisfy our curiosity.  What made it a Number 1 New York Times Bestseller?  Why did the NYT consider it one of the six books to read to understand Donald Trump’s presidential election win?

We discovered an autobiography without pretension.  Vance’s keen analysis of what saved him from his completely dysfunctional childhood was edifying.  A resilient child, despite his mother’s addictions and unstable partners, he found the love, support and discipline that he needed to succeed with his extended family and, subsequently, within the Marine corps.  He does explain the disaffection of working class whites, big losers in America’s de-industrialized society, and we concluded that they cling to the memory of their tribal identity – the extended families that were left behind in the Kentucky hills – to give them a semblance of status in America today.  Nevertheless, we did not find the book as conclusive an explanation for Trump’s election as we had hoped.  Lovers of literature, we were also disappointed in the writing style.  Vance’s writing is journalistic, clear and precise but we would have liked more poetry and grace. Hillbilly Elegy is nevertheless a deeply thought-provoking contemplation of the centrifugal forces threatening not only American society but the world today.

A Book Review by Virginia Lubin